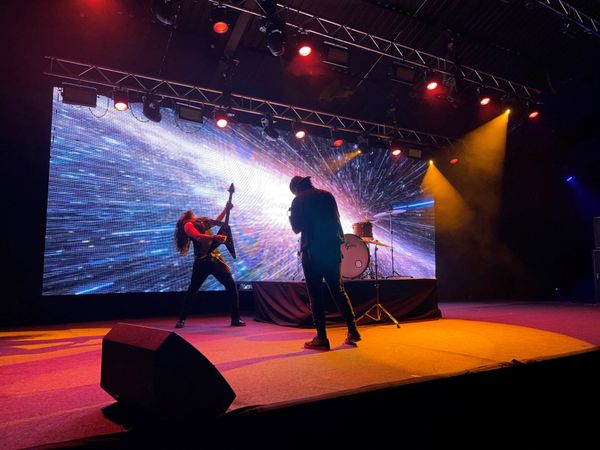 "Through hardships to the stars" - that's what it's like being in a band, especially with the amount of upheaval we've had over the last few years with record company woes, line-up changes and a pandemic all conspiring to delay the release of the best album we've recorded so far. But ... it feels like we're on the home straight!

Ten days ago, we got together to shoot a new video for a song for the first time in almost two years. It's always brilliant to see any creative idea go from a germ of an idea into something fully formed, whether it be a song, a design or, in this case a video. This idea was one I've had for a while but wasn't sure how to pull it off.

No massive spoilers - but let's just say Doomsday are heading further than we've ever been before. Here's a taster of it with Rowan throwing some world-class shapes. All will be revealed in the next few weeks!

Back in the saddle!

It's been a while but it finally feels like things are moving again. Having announced our new deal with Republic of Music (The Charlatans, Teenage Fanclub), the band have been getting ready to step things up. First of all we released One More Sip at the start of June (available here) with a video out next week - keep your eyes peeled!

And we have a busy month ahead, shooting a new video that will be out of this world (more on that later in the month), preparing to announce details of the new album (!) and playing Tramlines Festival - Corporation, Sheffield on Saturday 23 July - free entry, with a couple of heavy surprises for you all!

Can't wait for you all to see and hear what we've been working on!